Hear a replay of Part 1 of the show:

Hear a replay of the Phil Baker HECLA MINING Interview:

the largest and one of the lowest-cost U.S. silver producers,

the third largest U.S. producer of both zinc and lead,

and also a growing gold producer.

With four operating North American mines, a number of exploration properties and pre-development projects, a natural revenue hedge through the production of both precious and base metals, and its status as a growing gold producer, Hecla Mining Company is the largest primary silver producer in the U.S. – and the oldest NYSE-listed precious metals mining company in all of North America.

In addition to its diversified silver and gold operating and cash-flow generating base, Hecla has a number of exploration properties and pre-development projects in six world-class silver and gold mining districts in North America. With an active exploration and development program, the company has consistently grown its reserve base for future production, with 2016 reserves totaling 175 million ounces of silver and 2.1 million ounces of gold reserves.

Established in 1891, Hecla is headquartered in Coeur d’Alene, Idaho, and has a sister office in Vancouver, B.C. The company’s common stock has been traded on the New York Stock Exchange for over 50 years. 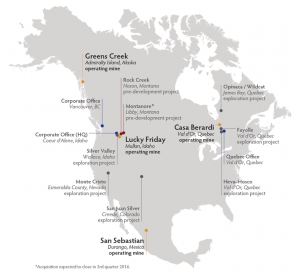 Use this Link To Watch The Show:

The show is broadcast live on the internet and on the air  from the studios of Radio Station WPSL AM 1590, Port St. Lucie, Florida – The Talk of the Treasure Coast