What To Invest In

The last 3 years our gains have gotten progressively greater year over year.

There are 4 Open Positions:

the world tempered with the end of the week news about QE from the EU…..However, I am

very wary and that means smaller positions and less funds in use.

Comments from Washington show the denigration of the process in favor of “more of the same” from the President and everyone else.  This is not really my opinion in favor of either about anything other than getting re-elected.  The pension and health benefits and perks of the office (I believe) were given because of the value of service and relatively low pay scale of public service.  These clowns have made a mockery of service in favor of self promotion.  Even more the local offices have joined the club.  The Governor of my home state, Deval Patrick is headed out for the ninth time in less than two years at the expense of the voters (roughly $250,000 per trip) to Denmark…a country that has a smaller GDP than Massachuttes.  Just another lame duck quacking for his future.

I am watching several charts that have lagged the market.  CRM has been consolidating since its gap up two weeks ago.  It is a little overbought right now but a pullback to $58 would get me long some calls.  COH, a stock that has been a major disappointment for the last 2 years looks like it may try to move here, but I’d favor the puts near $39.

Financials have also lagged with the yield curve recently in question, but if our position in the TBT calls is correct and rates edge higher, then BAC and XLF look interesting.

Remember, these trades are based on your participation in the

TEXTING SERVICE TO RECEIVE ALL UPDATES.

Options Trading Strategies Notes: In Texting we have a limited amount of words. In the interest of brevity: we use 8=August , 9=September . The Quantity and Strike Price for each trade is specific.

Each stock is allocated a theoretical $ 5,000 share of the portfolio unless otherwise indicated.

Recommendations will be both listed in this letter and texted to members.

Previous closed out stock and option positions can be found in past Market Strategies Newsletter issues available in the VIP Subscribers Members Area.

TEXTING SERVICE TO RECEIVE ALL UPDATES.

We now have five options positions long and one short, the RPTP Calls.

NBG  is roaring back as are some small cap bio-med stocks held over from last year.

We also have not counted dividends received on stocks like Apple, Nordic American (NAT),

The Stock table has the following 17 positions:

The options call for a $ 2,500 investment unless otherwise stated; each stock position requires $5,000 unless specifically stated.

We are basing money management on a hypothetical

These figures are approximate. We do not count commission costs and there may be errors.

Executions that have occurred at or near the open or close of trading sometimes vary from our actual numbers.  For example, when something opens down and it is through our price, we take the next trade whether it is an uptick or continues lower.  This sometimes results in a 50% trade that is slightly above or below the exact number.

What To Invest In

Rules for the Market Strategies

Note: Previous closed out stock and option positions can be found in past Market Strategies Newsletter issues available in the VIP Subscribers Members Area

The Fed’s Beige Book showed increased economic activity highlighting improvement across the board. The ISM Services index rose to a nine-year high while the ISM Manufacturing Index

came to a three –year high. Then, just as the Fed was about to wind down its bond-buying program, ECB president Mario Draghi decided to begin a program similar to that of our Federal Reserve and the Bank of Japan,  buying assets such as  residential mortgages and business loans.

The ECB announced plans to buy up to $ 700 billion Euros to reverse the shrinkage of its balance sheet. The German Bund fell to a record low 0.93%. Conversely, The dollar soared To 83.80, its highest close since September 2010. The greenback seems well on its way to achieve 84.97, the high August 6th, 2013. The Fed will sell securities to restrain the relentless greenback.

The strong dollar will weigh on commodity prices such as gold and oil, improving American saving, not spending, as Americans are saving more, spending less on utilities, gas  and retail. High end retail stores like Gap ( GPS: $ 44.65 )  and Michael Kors  ( KORS: $ 76.39 ) are responding with declines in same store sales. Conversely, stocks like Blackrock ( BLK: $ 332.74 ) with a huge myriad of exchange traded funds are continuing to thrive.

Large Cap stocks, like Microsoft ( MSFT: $ 45.90 ) Intel ( INTC: $ 35.00 ) Hewlett Packard ( HPQ: 37.58 ) which in the past have been slow to participate in the market strength and are now coming on strong. Microsoft will benefit from its staple and core operating  profitability. Ingenious products like Office remain the cash cow and they have plenty of prowess for new acquisitions.

The strong dollar may also weigh on equities and we would us a close below the 13-day moving average as a stop loss point for the above suggested stocks.

The August Employment Report came in at just a 142,000 increase in Nonfarm Payrolls.

Private payrolls added 134,000 jobs in August, down from a 213,000 gain in July. This was the first time since January that payrolls didn’t add at least 200,000 jobs in a month and was the smallest increase since December 2013. Wage gains are only up 2.1% in a year or flat when considering inflation which keeps productivity rolling along at a high level.

Over the last several weeks, the initial claims level dropped below 300,000. These levels normally imply monthly payroll gains of about 300,000. The decline in the unemployment rate was mostly the result of a small drop in labor force participation and not from an improvement in employment. With actual job growth less than half of the implied initial claims forecast, it would seem that the claims data are biased from seasonal adjustment or some other unknown shock.  The numbers are tarnished further as the birth-death adjustment contributed 50%,102,000 of the unadjusted rise in July.

This company has been trading up with volume. Performance is outstanding with positive results accelerating. Management is extremely talented but at the same time very conservative in their disclosures of drilling successes and future opportunity.

Performance value exceeds their market cap. The company could easily earn a nickel a share (Australian).

It would be logical for a much higher share value, perhaps 10 to15 cents which is very much in the picture this year.  Aurora Energy Partners associated with Victory Energy (VYEY) is a believer; they just paid $ 6 million for a 10% interest in its Fairway Project in the Permian.

First in class pharmaceuticals designed to

The company’s lead product candidates are Entolimod, which is being developed as radiation countermeasure and a potential cancer treatment, and Curaxin CBL0137, a lead oncology product candidate.

The company conducts business in the United States and in the Russian Federation through our three operating subsidiaries, Incuron, LLC, BioLabs 612, LLC and Panacela Labs, Inc. 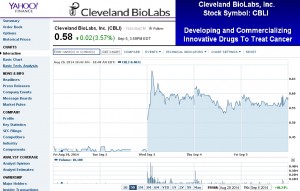 After suffering their first monthly decline in five months in July, DJIA and S&P 500 rebounded handsomely in August gaining 3.2% and 3.8% respectively. August 2014 handily outperformed the average August loss since 1950. For S&P 500, August 2014 was its best August performance since 2000 and the tenth best since 1950. NASDAQ and Russell 2000 also had a banner month with both indices climbing 4.8%. Strength was broad-based across ETF sectors with 27 of 29 sectors tracked posting a gain in August. Bear/Short and Currency sectors were the only decliners. Currency sector losses were due to U.S. dollar strength in August, which has continued in September.

Many of the market letter writers have no choice but to look bullish, even though expecting a pullback. Everyone is expecting the proverbial set-back, but the markets have been backing and filling on the rallies so are not over-extended.

Every year while preparing the annual Almanac, the analysts at the Stock Trader’s Almanac revisit and analyze sector seasonal changes  (STA 2015 pages 94, 96 and 98) in great depth in order to make adjustments for any new or developing trends.

There have been a few minor revisions made the Sector Seasonalities table over the past few years, but for the most part, sector seasonality has been reasonably on track since September 2009 with many sectors producing the bulk of their annual gains during their traditionally favorable periods. Years of sector research allows us to specify whether the seasonality starts or finishes in the beginning third (B), middle third (M) or last third (E) of the month based upon the number of trading days in the month.

Stocks to buy on a September dip

Princeton has been engaged by Target Energy. No contract is currently in place. When there is no movement in penny stocks, even though there is none or very small losses, we will liquidate ( sold AIVN on stop ) even though we like the company, if money is needed for better opportunities.

Pursuant to the provisions of Rule 206 (4) of the Investment Advisers Act of 1940, readers should recognize that not all recommendations made in the future will be profitable or will equal the performance of any recommendations referred to in this e-mail issue. Princeton may buy or sell its free-trading shares in companies it represents at any time.

Please Direct All Inquiries To: 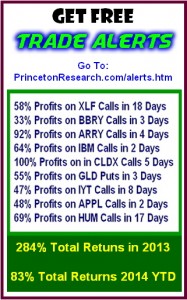