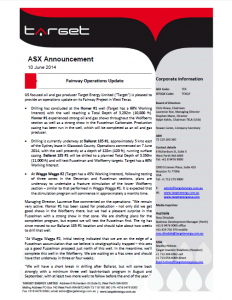 Get TEXQY Quotes and Trading Charts on Yahoo Finance:

Target Energy is a U.S. focused domestic oil and gas exploration and production company.  The company has assets in the Permian Basin, West Texas and in the Texas and Louisiana Gulf Coasts.

Managing Director, Laurence Roe commented on the operations: “We remain very active. Homar #1 has been cased for production — not only did we get good shows in the Wolfberry there, but we had a pleasant surprise in the Fusselman with a strong show in that zone. We are drafting plans for the completion program, but expect we will test the Fusselman first. The rig has since moved to our Ballarat 185 #1 location and should take about two weeks to drill that well.

“At Wagga Wagga #2, initial testing indicated that we are on the edge of a Fusselman accumulation that we believe is stratigraphically trapped — this sets up a good Fusselman prospect just north of this well. In the meantime, we’ll complete this well in the Wolfberry. We are waiting on a frac crew and should have that underway in three or four weeks.

“We will have a short break in drilling after Ballarat, but will come back strongly with a minimum three well back-to-back program in August and September, with at least two more wells to follow before the end of the year.”

NOTE: In accordance with ASX Listing Rules, any hydrocarbon reserves and/or drilling update information in this report has been reviewed and signed off by Mr. Laurence Roe, B.Sc, Managing Director of Target Energy, who is a member of the Society of Exploration Geophysicists and has over 30 years’ experience in the sector. He consents to that information in the form and context in which it appears.

Mike King has passed on.

This site is no longer active.

The Market Strategies Newsletter and the Options Trade Alerts Service has been and is now run by Charles Moskowitz.

For information on his: